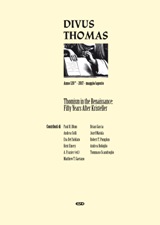 Thomism in the Renaissance: Fifty Years After Kristeller

Thomism in the Renaissance: Fifty Years After Kristeller is a special issue of Divus Thomas prepared in celebration of the fiftieth anniversary of Paul Oskar Kristeller’s foundational essay in the history of philosophy, Le Thomisme et la pensée italienne de la

Renaissance (1967; expanded Eng. tr. 1974).
In Le Thomisme, Kristeller revealed the lively continuity, in the age of Renaissance humanism, of philosophical topics, positions, and methods associated with medieval scholasticism. Kristeller revised scholarly understanding of that epochal encounter in three discipline-changing ways, all closely related.
First, by drawing on a formidable documentary base of unknown and under-utilized sources, he re-examined Aquinas’ place in doctrinal debates both within and without the Dominican order.
In this way Kristeller shed such light on the reception of Aquinas’ thought as to open a new field of study, Renaissance Thomism.
Second, Kristeller emphasized the fact that, outside the Dominican Order, Thomas was just one among many medieval scholastics of interest to Renaissance intellectuals. Albertus Magnus, for example, was arguably of more interest to the natural philosophers
than was Thomas, while Franciscan promotion of Duns Scotus ensured the importance of Scotism among Italian theologians.
Ockham, in contrast, had few peninsular adherents. And third, drawing up a three-stage history of Thomas’s reception, Kristeller pointed out that the saint did not begin to emerge as such a singular representative of the Middle Ages tout court until the mid-sixteenth century. It was Aeterni patris (1879) that gave us Thomism as the quintessentially ‘medieval’ theology we know today.
In this special issue, six young scholars take up the challenge of “Le Thomisme,” extending and deepening Kristeller’s findings. They adopt his historical stance to analyze aspects of Renaissance Thomism in significant contexts: among theology professors at
University of Padua; in a lay philosopher of syncretistic bent; in DT 120, 2 (2017), pp. 11-12 11 the household of a Greek émigré cardinal; in manuscripts and early printed books; and among the learned Jesuit missioners to Asia. Two senior scholars provide the introduction and conclusion. In the former, warning against the pitfalls of doing history through “-isms,” P.R. BLUM elucidates the markers of humanism and Thomism. In the latter, KENT EMERY, Jr. comments on the essays, noting their responses to Kristeller’s work; Emery highlights the complementarity of humanist and Scholastic modes of learning, and notes Aquinas’s part in the celebrated Renaissance debates concerning the superiority of Plato or Aristotle, the correct interpretation of Aristotle, and the immortality of the soul.
At the Chicago 2017meeting of the Renaissance Society of America, two commemorative panels on “Thomismand Renaissance” attracted excellent speakers and large audiences. Those papers appear here thanks to the generosity of Fr. Marco Salvioli, editor of Divus Thomas.
Frazier has edited this collection on behalf of the American Academy in Rome-Society of Fellows. 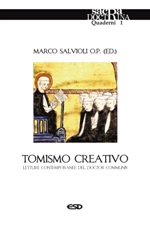 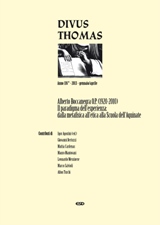 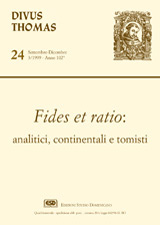 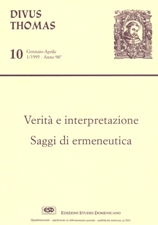